Today was an interesting day full of firsts, as well as a first for the blog… hold the phone, because this mouskaholic is getting ready to talk about (shhhhh) Universal!  Today Craig and I headed to Universal Studios and Islands of Adventure.  Universal Studios has never held much appeal to me, nor have I had the desire to visit, that is until they added the Wizarding World of Harry Potter!!!!

Our first “first” came by venturing off Disney Property by the use of Uber.  If you’ve never heard of Uber, it’s a Taxi Service where drivers use their own cars and you call them for pick up via a smartphone app.

We headed to the front entrance of our resort and scheduled a pick up.  The app was very easy to use, and our driver was there to pick us up in about 5 minutes.  I was able to see how close the driver was on the app as well as their name and the type of car they were driving.

When we left in the morning it must have been a very busy time because it said there was going to be a double fare surge charge.  Our fare from Port Orleans French Quarter to Universal ended up being $26.74 because of the surcharge.  It was still much quicker and more personal than riding a bus that stops at many resorts, and it was much cheaper than traditional taxi fares.

Disney and Universal are two completely different places, so it’s not fair to compare them, however being a self proclaimed Mouskaholic, it’s really hard not to compare!  The first thing that took me by surprise is that we arrived right around 8am as the park was opening, and there was hardly anyone there!  We headed straight for Diagon Alley and I was completely overwhelmed!  It was a HUGE sensory overload!  So much to look at and so much excitement!  We were quite excited because the Escape from Gringotts ride was only a 20 minute wait, we ended up waiting almost an hour because the ride had broken down.  We decided at 9:15 to resign ourselves and to just come back later.  We got to the entrance and I said something to one of the cast members about being disappointed and he pulled me aside and gave me an express pass to come back with no wait!  I was very impressed with that!  It made my day a little more special! 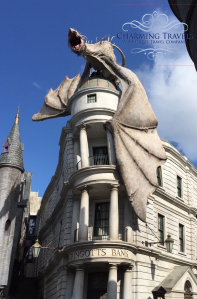 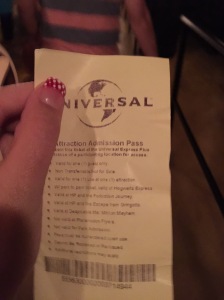 Express pass to return to ride

After that we headed to the Leaky Cauldron for a butter beer.  There are three different versions of butter beer that you can get, frozen, cold, or hot.  We both went with the frozen and it was so wonderful!  It reminded me of cream soda slushy.

After purchasing our wands, casting a few spells, and visiting some of the shops, we boarded the Hogwarts Express and it was SOOOOO cool how they made it so you could walk through a brick wall to get to Platform 9 3/4!  Super impressive.  The ride on the Hogwarts Express was equally impressive.  When we arrived at Hogsmeade station there was only a 10 minute wait for the Dragon Challenge.  One thing that TOTALLY caught me off guard was that you had to go through a metal detector for this ride!  I thought that was a little crazy.  Craig ended up having to go back to the locker and put his cell phone in because it set the detector off.  I get that they don’t want you to use electronics on the ride, but I see no reason that it couldn’t be in your pocket. 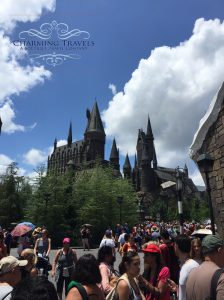 After the Dragon challenge we headed to lunch at the Three Broomsticks.  I had the sheppard’s pie, and Craig had the chicken.  We got pumpkin juice and pumpkin fizz to drink.  All I have to say is pumpkin juice > butterbeer.  It was SOOOO good, I just wanted to stay and drink pumpkin juice all day!

We then headed to Harry Potter and the Forbidden Journey.  This was another great ride.  Truly the technology used in all of the rides, and stores and attractions was outstanding.

We headed back to the Hogwarts Express and Universal Studios around 1:30 and spent a bit more time with the other attractions.  We checked out the Transformers 3-D ride, Twister, and MIB Alien Blasters.

I did enjoy the attractions, and especially loved the theming in the Harry Potter area, but there were a few things that really annoyed me (this is where I start comparing to Disney).  There were not enough trash cans, which resulted in a dirtier park (and even over flowing trash cans!)  Craig in fact stepped in gum (part of the reason that Disney doesn’t even sell gum in its parks).  Not to say someone couldn’t bring their own gum in, it was just an observation among others about the cleanliness of the park.  The biggest frustration in our day too was that it seemed for every major ride you had to store your items in a locker.  I was thankful that the lockers were free while you were riding, but it was a pain!  We got out of line the first time for Gringotts, and then had to store our items again, then we had to store luggage for the Dragon challenge, again for Forbidden journey and AGAIN for MIB.  Disney is very good at knowing that people will have carry on items and having a way to store them.  (Um hello… you want people to spend money in your parks and to have items to carry around!)  Craig was so frustrated by having to get a locker again at MIB that we almost didn’t ride it at all!  The lockers were also in very closer quarters, and very hard to access with many people trying to get in and out.  That portion was not the greatest experience.

Okay enough complaining… we decided to headed out around 4:45pm.  At that point we had spent a good deal of time at Universal and were ready for dinner!  We summoned a driver via Uber and went to Giordano’s (stuffed Chicago style pizza!!!).  Our Uber fare was at a 1.5 surcharge rate (again guessing because it was rush hour) and ended up being $6.15. 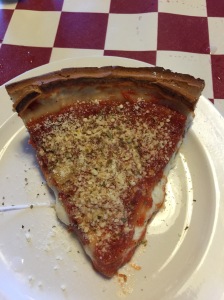 We enjoyed dinner and then headed back to Port Orleans.  Our Uber fare on the ride home was $11.65 and definitely our most friendly driver 🙂

It was a good day.  I enjoyed the Harry Potter experience, but definitely felt good to be back “Home” at Port Orleans French Quarter! 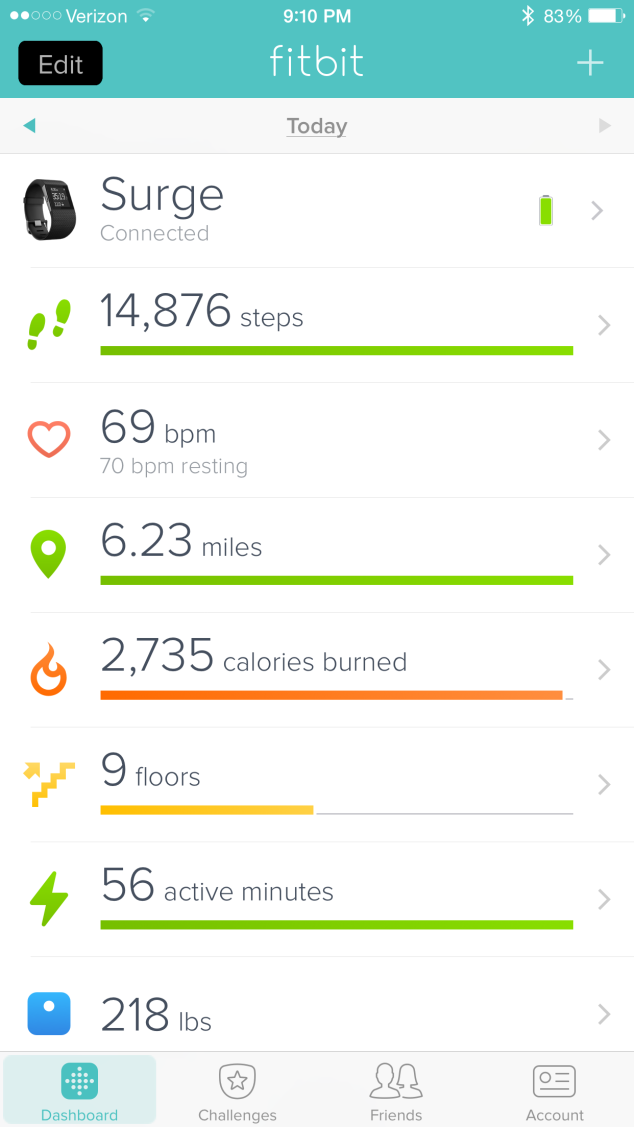 If you’re interested in planning your own trip to Disney or Universal be sure to contact Ashley@charmingtravels.com