Disney’s Haunted Mansion is a long time fan favorite.  It has received its fair share of updates and is slightly different in Disneyland and Disney World (not to mention it’s counter parts – Phantom Manor in Disneyland Paris, and Mystic Manor at Disneyland Hong Kong). 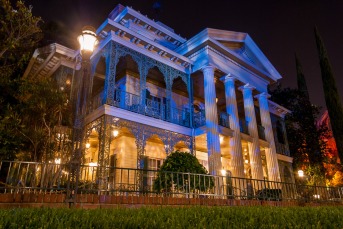 One of the most obvious differences that I so enjoyed when I visited Disneyland this past November was the stretching room.

Did you know that the Hitchhiking Ghosts from Disney’s Haunted Mansion had names?  I just recently discovered this fun piece of trivia!

The names of this ghostly trio are Gus (the prisoner) , Phineas (the traveler), and Ezra (Skeleton).

The Hitchhiking Ghosts’ names were not originally a part of the Haunted Mansion storyline.  The names are thought to have been originated and popularized by the cast members.

The ghosts are so popular that they’ve even been the subject of artwork by Annie Leibovitz. 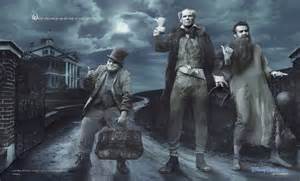