Alright, so after traveling for the better part of Thursday night we arrived and were ready for an awesome day in the park on Friday!

I ended up waking up at my normal Ohio time and couldn’t go back to sleep… alas, we got up and headed to breakfast at the hotel.  We are staying at the Best Western Stovall’s Inn, and what a great hotel!  The rooms are clean, updated and spacious, free breakfast (full breakfast too… bagels, cereals, muffins, pancakes, potatos, eggs, and breakfast meats!) and the great thing is, it’s walking distance to the Disneyland parks, in fact, you can see the back end of the California Adventure park from our hotel.

After breakfast we headed to Disneyland park and went straight to New Orleans Square, Craig was super excited because he got to meet his favorite Disney character- Jack Skellington.  This was fun because outside of the Mickey’s Not So Scary Halloween Party, and the Mickey’s Very Merry Christmas party, he is not seen at Walt Disney World.  After the photo op we headed right for the Haunted Mansion which is decorated with a Nightmare Before Christmas theme from September through January.  It was an AWESOME experience to see the ride all decorated.  And one main difference I noticed right away (outside of the awesome decor) between the WDW version and the DL version is the “Stretching Room” scene at the beginning, is actually an elevator at Disneyland and you go down into the mansion. 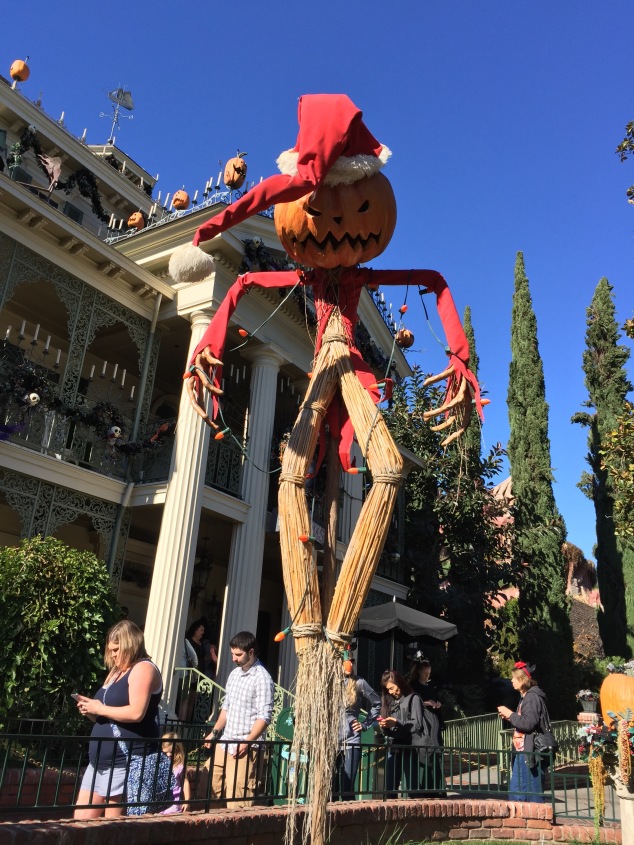 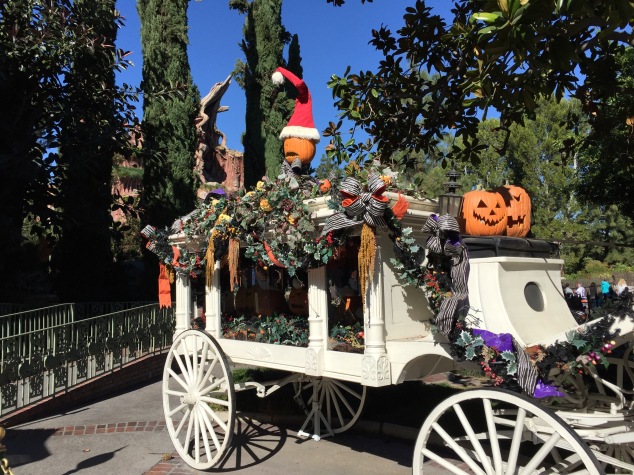 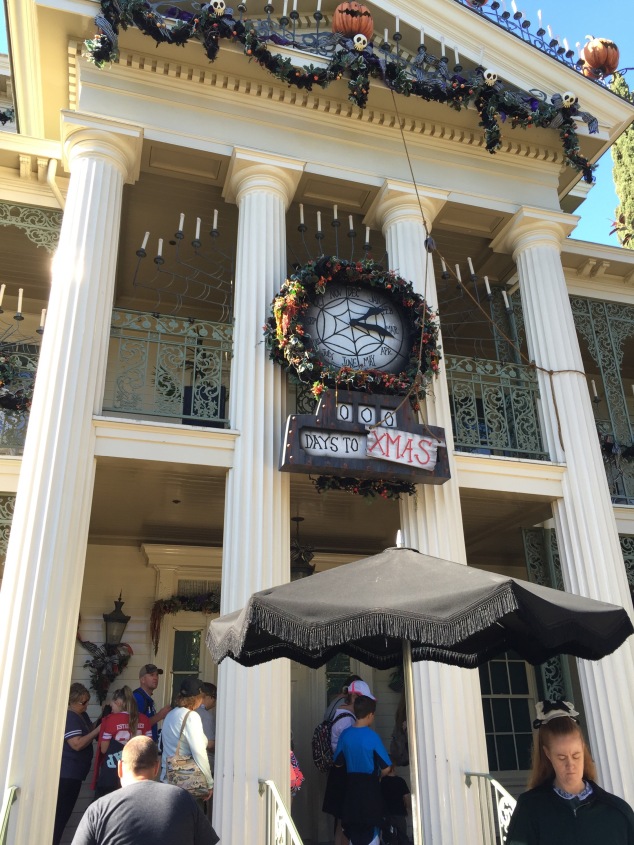 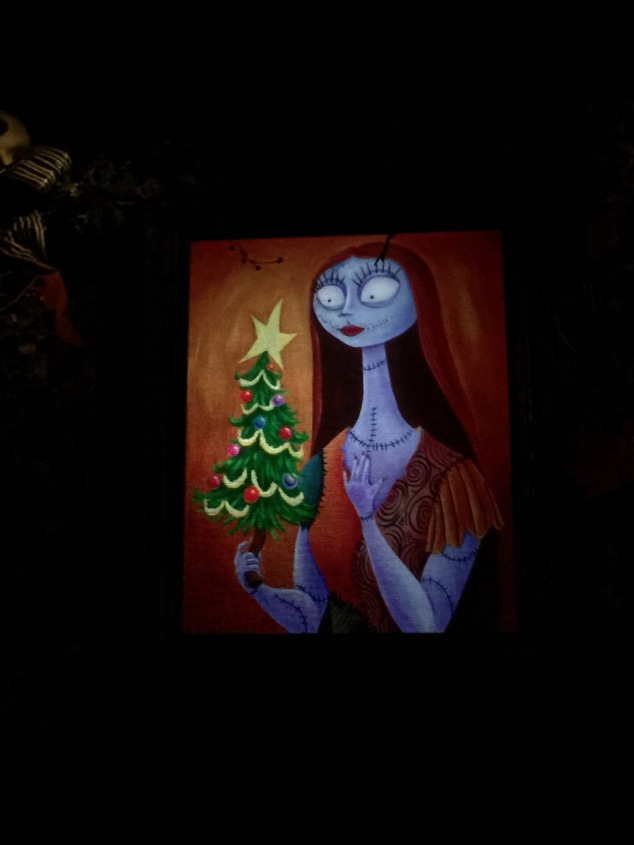 After Haunted Mansion we headed to Pirates of the Caribbean.  The version here at Disneyland is also quite different and quite possibly even better than it’s Disney World counterpart!  The ride is quite a bit longer.  When you first get on the ride you also pass an indoor restaurant called the Blue Bayou.  It reminded me a little bit of San Angel Inn at Epcot with the dim lighting and boats passing by.  The Blue Bayou is very popular restaurant at Disneyland, and reservations are required many days in advance.

Since we had conquered two rides and a character meet and greet we decided to head towards Downtown Disney for lunch at the Earl of Sandwich and then go to the Race expo at the Disneyland Hotel and Conference Center. As always, Disney always puts on a terrific race expo 🙂  I bought a new running skirt and cape for the race from the good folks at “Team Sparkle.” 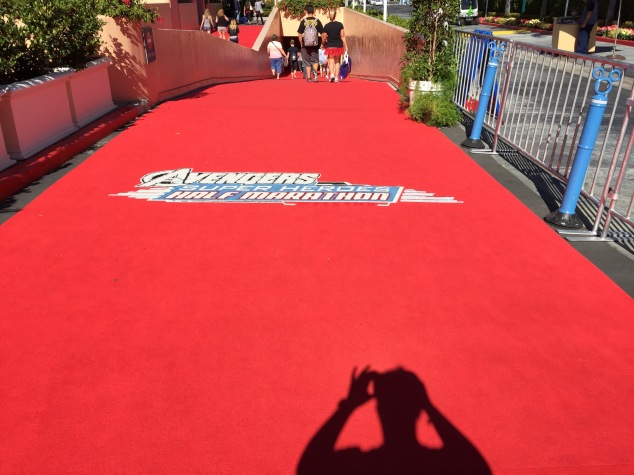 With our bags full of race expo goodies we made our way back to the hotel to drop off our items and a quick cat nap.  Around 2pm we headed back to the park to ride the “Indiana Jones Adventure.”  It was action packed and exciting!  I was glad we grabbed a fast pass for it before we headed to the expo though because the wait time was 45 minutes!  After there we headed to “Critter County” and grabbed a fast pass for Splash Mountain and then rode the Many Adventures of Winnie the Pooh.

We then boarded the train and headed to ToonTown because we didn’t venture there at all on our last trip to Disneyland.  We had a quick snack and then decided to visit the house of the Mouse himself.  You can venture through Mickey’s house and then head into his back yard and “movie barn” to meet him.  It was a great interaction with Mickey and it was nice because our photographer didn’t make us feel rushed.

Next we went to “It’s a Small World.”  One of my favorite things about Small World from when we visited in 2012 was seeing how they incorporated Disney characters into the countries that they are from into the ride.  So not only was it fun to see the characters interwoven, but Small World is also decorated for the holidays. All I can say is WOW WOW WOW!!!!  It was so beautiful!!!!  Another great perk is that they had Christmas music interwoven with the Small World melody, so it wasn’t just the small world song for 15 minutes! 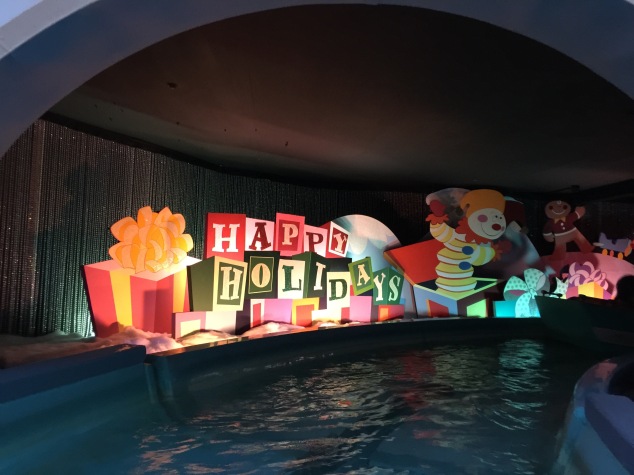 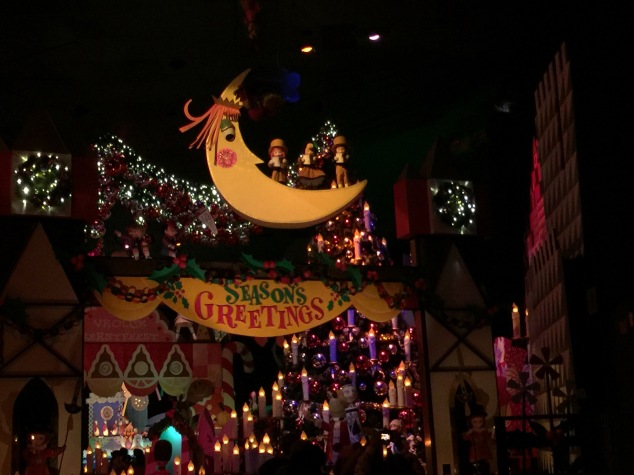 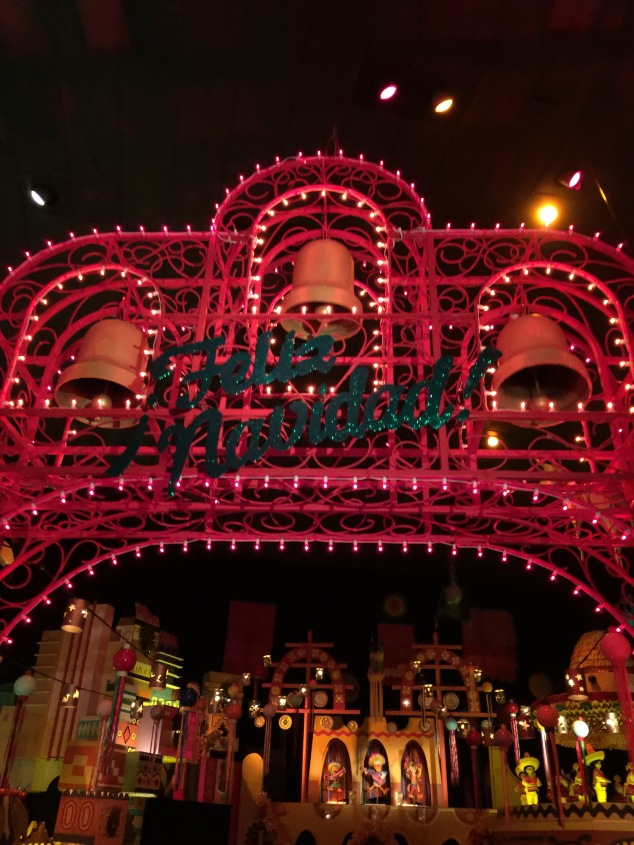 When we boarded our boat it was just starting to get dark and when we got off it was dark.  We waited until 5:30 to watch the lights come on for the ride and INCREDIBLY BEAUTIFUL is an understatement.  It was almost overwhelming to watch the outside of the ride burst to life with color.

After our small world experience we had the opportunity to visit some of my friends who live in the Hollywood area!  It was so fantastic to see them!  It had been 8 1/2 years since we’ve seen them!o

They recommended that we go see the Mickey and the Magical Map show, and what a GREAT recommendation!  It was about 20-25 minute show, and was full of fantastic singing, dancing, and special effects!  After the show it was time to part was with Ben and Ernie and head to dinner at Cafe Orleans.  We enjoyed Pomme Frites as our appetizer (think of garlic parmesan french fries with a cajun dipping sauce) and then Craig had chicken gumbo crepes and I had the monte cristo sandwich (think of an elephant ear with cheese and meat inside… complete with powdered sugar on top) and it was all DELISH! 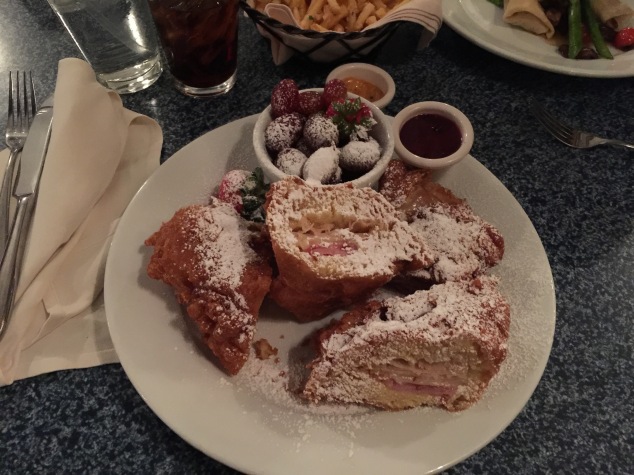 After dinner it was time to head back to the hotel for some shut eye!  It was a fantastic day and we had an absolute blast 🙂

Alright, after a long day at work for both my husband and myself we boarded a plan in Ohio and headed to Los Angeles for RunDisney’s Avenger’s Half Marathon Weekend!!!

The first thing that I learned on this trip is that flying after work is exhausting, especially when it is a 7 + hours in the air kind of trip. When I originally planned the trip in my mind it was going to be WAY better to fly out on a Thursday after work so that we could hit the race expo AND enjoy more park time on Friday.  I still think this was the right choice, but eeesh with the 3 hour time difference and waking up at my normal Ohio time, I’m pooped and the day hasn’t even begun.

All flights went smoothly AND we got a fun bonus… as we were eating our dinner waiting for our first flight, a man asked if anyone was flying southwest (which we were) and handed me 4 drink vouchers to use on the plane!!!  SCORE!  What a nice way to start the trip and take the edge off on a long trip! 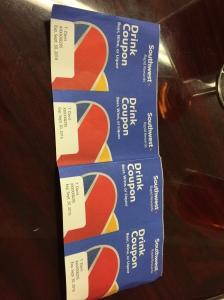 We got into LAX at 11:20pm California time, so 2:20am Ohio time… LONG day!!!  After getting our bags we were ready to hit the road by 11:45 or so.  When I booked our trip I had purchased round trip transport on the Disneyland Express.  Much to my dismay when our travel documents arrived I realized that our flight was coming in far to late to use this bus service and that it was non-refundable.  Lesson learned.  There are other shuttle services that run 24 hours, but after having so much fun and success with Uber on or Disney World trip we decided well in advance that we would just take Uber to our hotel in Anaheim.

I won’t call using Uber for our hotel ride a mistake per say, BUT at midnight there were absolutely no Uber X drivers at LAX (I don’t know if that was the time of day or if that is standard practice for Uber out here), so we had to take “Uber Select” which is considerably more expensive.  The reason that I won’t call it a mistake, is that after 7+ hours on a plan with VERY little leg room, riding in the back seat of a BMV 7 series with leather interior and dual climate control was a DREAM!!!  But for a nearly 40 minute car ride from LAX to anaheim it was WAY more expensive than I care to admit that I paid for a car ride.

We got checked into the beautiful Best Western Stovall’s Inn around 12:30 pm and hit the hay!  I am excited for Day 2 of our adventure because that’s where the fun is!!!  Day 2 will be in the parks, race expo at the Disneyland Hotel, (hopefully a nap), hanging out with friends that live out here, and a drink at Trader Sam’s Enchanted Tiki Bar!!!  Have a great Friday mouskaholics

Yes Halloween was only 3 days ago, but the holiday season has come to Walt Disney World!

One of the most amazing Christmas displays that Disney puts up is the Osborne Family Spectacle of Lights at Hollywood Studios.  Today was the soft opening of the display (photos from Sharon Perkins- Charming Travels LLC).

This display is absolutely incredible and has run for 20 years, this will be its last.

I only wish I would have had the chance to see it!!!  I do leave for Disneyland in 9 days and am hoping to see some decor along with their awesome 60 year celebration!

If you’re interested in planning your own Disney vacation to see the Spectacle of Lights before they’re gone, be sure to contact Charming Travels LLC (info@charmingtravelsllc.com)