Todays Tuesday’s Tip is to set priorities on your trip.  When you’re doing your planning (ESPECIALLY IF IT’S YOUR FIRST TIME EVER!) do some research, and figure out which rides, attractions, and restaurants you would like to visit during your trip.  It is impossible to see every single attraction.  Even if you went to the parks on every single day of your trip, I don’t think you could possibly see and do it all.

Make a list for each park of the top 10-15 things that you absolutely want to do.  Try to get fast passes for the top 3 (if available) and then have fun and try to get to as many on your list.

Try not to stress out if you don’t get to everything on your list, who knows you may find something that you enjoy even more along the way 😀

And never forget priority #1- Have Fun and Create Magical Memories 🙂 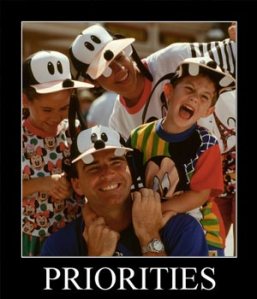 In 1967, Disney purchased Cinderella’s Golden Carrousel from the Olympic Park in Maplewood, New Jersey. The carrousel was originally built in 1917 by The Philadelphia Toboggan Company, one of the most prestigious carrousel companies. Ninety of the horses are from the original carousel, hand carved from wood. In addition, there are eleven fiberglass horses made by Disney.

When Disney acquired it, the company artists refurbished the 90 horses so that no two are exactly alike. 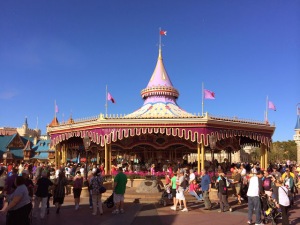 Cinderella’s Golden Carrousel was renamed “Prince Charming Regal Carousel” in 2010 to go more with the theming of “New Fantasyland.”

There are eighteen hand- painted scenes that tell the story of Cinderella on the wooden canopy that covers this attraction.

Here is an amazing article if you’re more interested in the history of the carrousels used at Disney parks, AND why they’re spelled “Carrousel” instead of “Carousel”

All Ears- History of Disney Carrousels

Today’s “Word’s of Walt” are about success

“To some people, I am kind of a Merlin who takes lots of crazy chances, but rarely make mistakes.  I’ve made some bad ones, but fortunately, the success have come along fast enough to cover up the mistakes.  When you go to bat as many times as I do, you’re bound to get a good average.  That’s why I keep my projects diversified.”

Well Walt, we are thankful for your mistakes, because each mistake you made you wouldn’t let it happen again.  You constantly were striving to be better – make better movies, try new techniques, make better parks, and make the world a happier place!

Have a great day mouskaholics!

Okay, it may have taken me a while, but you my readers asked for it, so here it is- My official review of the Seven Dwarfs Mine Train Ride.

If I were to give the ride a grade based a traditional school grading scale, I would probably give it a B+.

As far as thrills go, it isn’t the most thrilling ride, but let’s be honest… the Magic Kingdom isn’t built on thrill rides, it’s built on family friendly rides.  So for a thrill seeker like me, I would have liked to see more thrills, but understanding the nature of the park, I’m okay with it.

Comfort of the ride cars.  Leading up to our trip I read a lot about folks who were very uncomfortable in the ride seats.  I am an overweight person, and my husband isn’t tiny either, and both of us fit okay in the cars.  They’re not built super large, but we both fit.

The ride length is adequate.  I think that its a pretty average length ride.  Definitely longer than Goofy’s Barnstormer!  I know that was another big complaint of people when it first opened was how long the ride was.  Over all the ride lasts just under 3 minutes.  I had a fastpass for the attraction and only rode it once during our trip.  The average wait time while we were there was between 90 minutes and 110 minutes.  I can see where people would be upset if they had waited 110 minutes to ride it and then it was under 3 minutes, however, you my readers know that it’s a long line because it’s brand new, and you know that you should get a fast pass for it 😉

For me what takes it from a C to a B+ is the extraordinary theming and innovation that the imagineers put into this ride.  The audio animatronic dwarfs that you see in the ride are INCREDIBLE, and the overall attention to detail is nothing short of amazing.

Things that I missed out on during this experience-

#1 Riding it during the daytime.  Our original fastpass was for early afternoon, however it was raining (one downside of this ride is that it’s shut down if it’s raining… imagine waiting in line 60+ minutes and having it shut down due to rain… blech).  Thankfully with the new fastpass system if you miss a fast pass due to the ride being closed you can come back later at any time and ride it.  Because of this we ended up riding it at night and I think we missed a lot of the cool details. (On the other hand you get a fantastic view of fantasyland from the ride and it’s BEAUTIFUL at night).

#2 While I’m thankful to have not waited in line for 90 minutes for this ride, We also missed out on the interactive que.  The Disney Imagineers went all out on the theming for this que and making it fun and entertaining while you wait.  There are several “games” that you can play while you wait, and you miss that if you’re in the fast pass line.  Some day after the newness has worn off I will take the time to wait in that line and play the games 🙂

Overall I’m glad that we rode it.  I’m glad we had a fast pass for it, and I would definitely ride it again 🙂

If you really want to catch certain attractions, but can’t stand the thought of the long wait, check to see if there is a “Single Rider” option!  There are several rides that offer this, and it can significantly cut your wait time.  This option should only be used if you’re okay with not riding with your entire family all in one car, because chances are you won’t get that opportunity.

This option reduces wait time for you, and maximizes coaster/ride capacity for the parks!  More seats filled per ride keeps everything moving 🙂 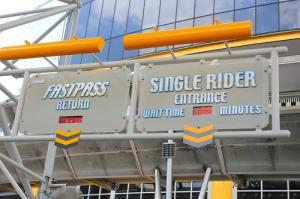 FUN FACT: World Of Color: The show has 1,200 fountains that can spurt jets of water into the air up to 200 feet and each fountain is mounted on an LED light ring capable of producing multiple colors.

The World of Color show can be viewed nightly at Disneyland’s California Adventure Park.

Alright, I am starting a new segment, and I will feature it on Thursdays.  Not every Thursday, but on occasional Thursdays we will hear “Words of Walt” and I will post a quote from Walt Disney himself.  I believe that Walt was an incredible genius and I’m intrigued by his business model and his life.

“The important thing is the family.  If you can keep the family together- and that’s the backbone of our whole business, catering to families- that’s what we hope to do”

Well Walt, I would say the Disney Parks do a great job of keeping families together!  I’ve yet to have been on a trip where I haven’t seen a family wearing matching shirts that say “Family Reunion” on them!  It’s the perfect location for young and old!  I can’t wait to go with my Aunt and Mom in January for some family time!

Confessions of a Mouskaholic
Create a free website or blog at WordPress.com.